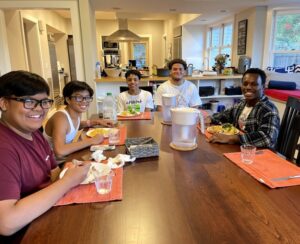 When we lived in Connecticut and my three sons were teenagers, my neighbor asked me to join the board of A Better Chance in New Canaan (“ABC”). She was a math teacher at the high school and was president of ABC, a nonprofit organization dedicated to educating high-achieving students of color from underserved communities. ABC identifies and places the students in the nation’s most rigorous and highly ranked public and private schools for four years. It’s a residential program with all costs covered for the students. (https://www.abchouseofnc.org/)

In my town, the teens were (and still are) all boys. I went up to the house, had dinner, talked to the kids, and fell in love with the program. Having three sons of my own, who were similar ages, made me feel comfortable with the eight boys living in the ABC house. (The photo is of the kids in the program right now.)

When my neighbor retired, and I took over as President of the Board, I ended up have dinner at the house every week, so I got to know the boys and the new resident director well. I also played basketball with them.

The work could be challenging. I tried to get the board members to understand that the ABC boys were like our kids, and they would on occasion do stupid things. As is common with all teenage boys, it was not a matter of “if” something went wrong, it was a matter of “when”. One kid did seriously cross the line, and I had to terminate him from the program. It was a good lesson for the other boys that our actions do have consequences. These students were so bright and had so much potential.

I was part of the committee that interviewed and selected the new students. I loved being involved directly with giving these young people a chance to become future leaders and contributors to our society.

One of my favorite memories was taking one of the boys, along with my son and our neighbor, to visit Cornell University. The young man applied there, got in, and graduated. This reflects the achievements of the program nationwide, where 90% of the scholars go on to graduate from four-year colleges – often prestigious ones like Cornell.

Get in touch today